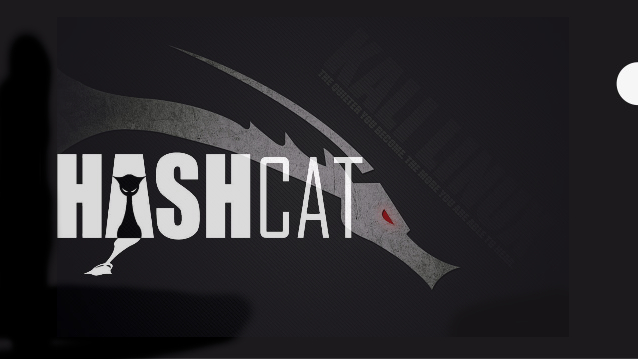 Welcome to HackingVision, in this tutorial we will demonstrate how to crack password hashes in Kali Linux with the Crackstation Wordlists.

In this tutorial, we are using GTX 1080 8GB and Ryzen 5 1600 CPU in this tutorial you can use whatever NVIDIA GPU that you like. By using both CPU and GPU in Hashcat we can obtain better password hash rates this allows us to crack password hashes faster and more conveniently than we typically could than just using a CPU.

If you’re using a GPU make sure you have the NVIDIA drivers for your GPU installed. If you don’t have access to any NVIDIA GPU a strong CPU is recommended the wordlist we are going to be using is 15 GiB uncompressed Hashcat will take a little while longer if your de-hashing passwords hashes without a GPU. Hash rates will depend on the speed of your computer’s CPU the faster your CPU the better, If you have a fast GPU you will be able to crack passwords much quicker. There are many factors that come into play when it comes to password cracking such as the size of the wordlist, the size of the target hash file and the speed of your CPU or GPU. For example, Dehashing passwords for certain hashing algorithms can be slower than other hashing algorithms. If you are cracking a lot of large password hash lists an SSD is recommended in this guide we are using a standard 1TB HDD currently all of my SSD’s are occupied by other operating systems.

In this tutorial, we will be de-hashing SHA1 hashes. You can use sha1-online to encrypt SHA1 password hashes. Let’s create some hashes to test with Hashcat. 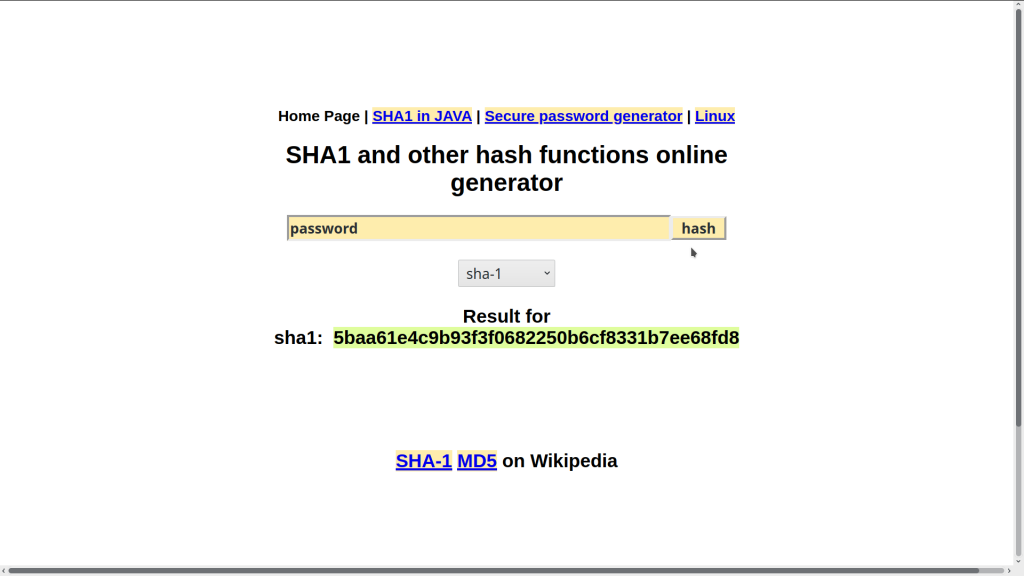 Open up a terminal and enter the command. This command will create a new text document called sha1.txt enter your password hashes add each hash byline. You can copy the password hashes below if you don’t want to hash your own password hashes. 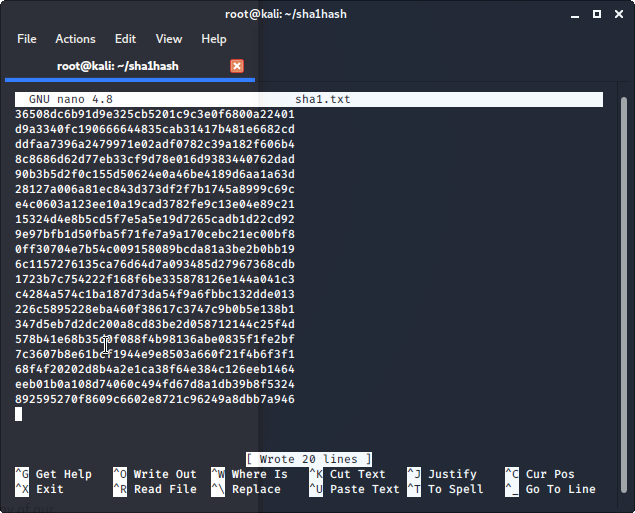 Once you have finished adding your password hashes in nano you can write the file by using keys CTRL+O after changes have been written use CTRL+X to exit the nano text editor.

The passwords that we hashed should be the following when decrypted let’s see if Hashcat can find any of our password hashes. 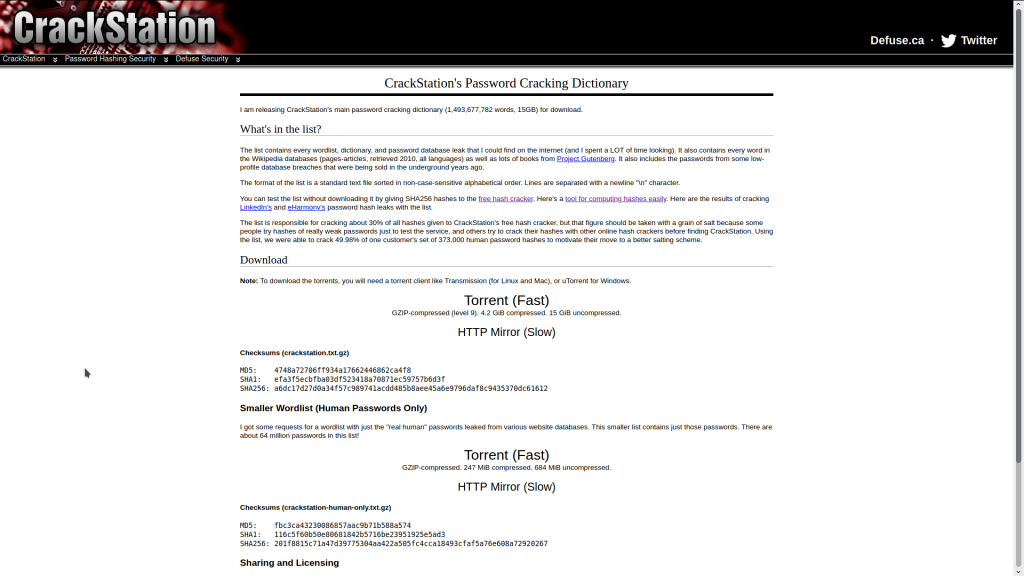 In this tutorial, we will be using Crackstation.txt.gz wordlist. You can choose whatever wordlist you want to use you don’t have to use the crackstation ones that we have included in this tutorial to use Hashcat. We recommend these wordlists as they include lots of leaked real human passwords if you don’t know what the Crackstation wordlists are there the results of Crackstation cracking LinkedIn’s and eHarmony’s password hash leaks with the list.

Default wordlists in Kali Linux are stored in /usr/share/wordlists

To uncompress .txt.gz files we can use gunzip install gzip by opening a terminal and entering the following command. gunzip will uncompress wordlists within the same directory as it’s run from.

Now that gzip is installed we can uncompress the wordlists we downloaded from Crackstaion using the following command.

To uncompress the smaller real human wordlist from crackstation you can use the following command. 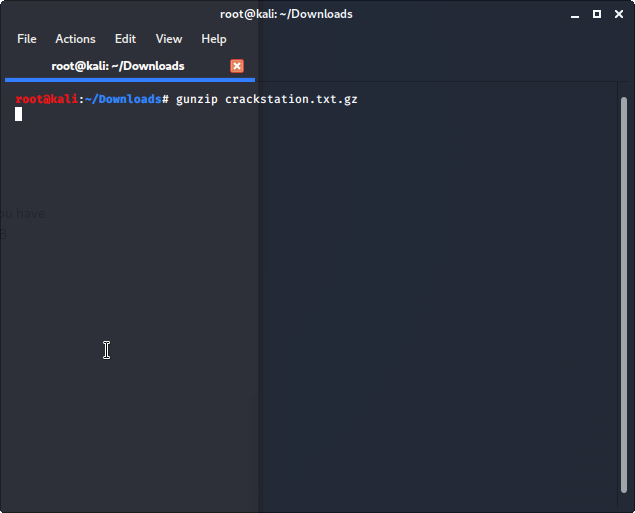 Now that we have uncompressed the Crackstation wordlists we can now use them in Hashcat.

Its time to run Hashcat against our target SHA1 hashes. Let’s see what hashes we can dehash.

cd into the directory that your hash list is stored in edit the following command -m 100 is hash type SHA1 add the location of your hash list and wordlist. 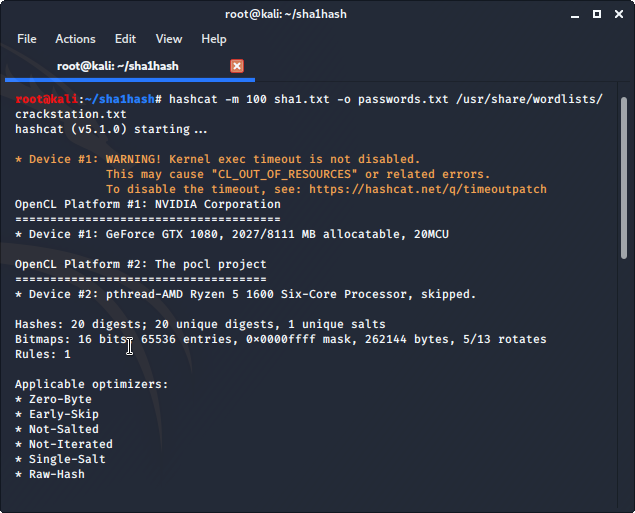 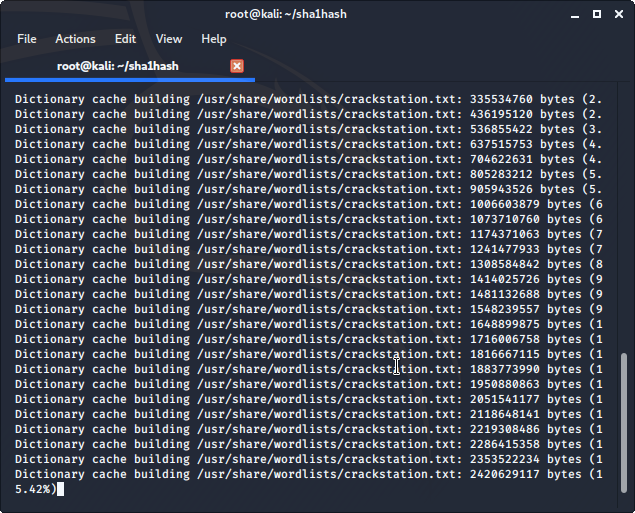 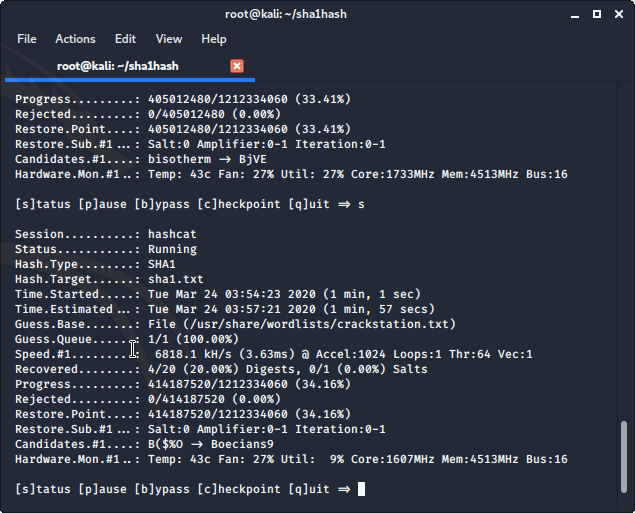 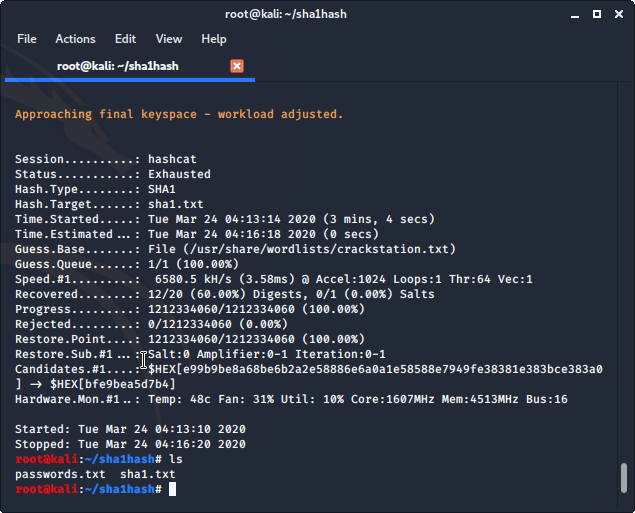 Hashcat found 12/20 password hashes that we gave it using the crackstation.txt wordlist.

From the directory that your passwords.txt file is saved in use the following command to list the password words that Hashcat was able to recover. cat is a standard Unix utility that reads files sequentially, writing them to standard output. 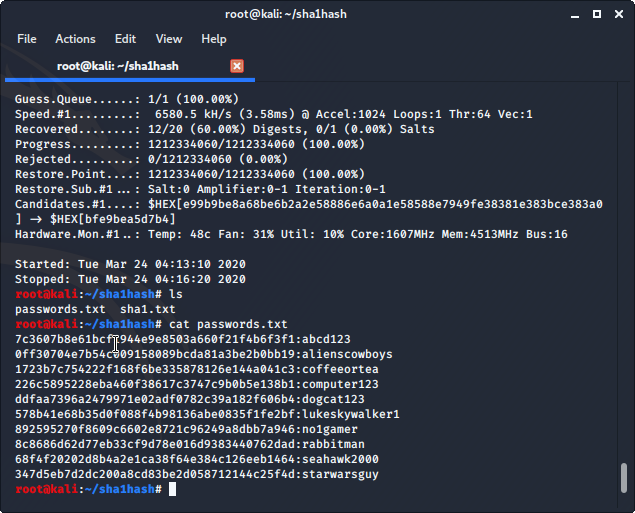 If you have found a spelling error, please, notify us by selecting that text and pressing Ctrl+Enter.