Hi welcome back today in this tutorial you will learn how to scan for various wireless network information using airodump-ng. This information will allow further attacks to be preformed on Wireless Access Points in range. Airodump-ng comes pre-installed in Kali Linux.

If your using a different Linux operating system install airodump-ng by installing aircrack-ng.

What is Airodump-ng ?. Airodump-ng is used for packet capturing of raw 802.11 frames and is particularly suitable for collecting WEP IVs (Initialization Vector) for the intent of using them with aircrack-ng. If you have a GPS receiver connected to the computer, airodump-ng is capable of logging the coordinates of the found access points.

First we will need to put our Wireless Interface in to monitor mode.

Now put your card into monitor mode using the command below.

This will allow your wireless interface to be placed in monitor mode.)

Optional: If you would like to spoof you mac address to a random mac address use the following command.

(This will then put your wireless interface back up in monitor mode.)

Start airodump-ng, Open up a new terminal and type airodump-ng wlan1 (replace wlan1 with your wireless interface) if you don’t know what the interface of your wireless card is use ifconfig to find it and press enter. 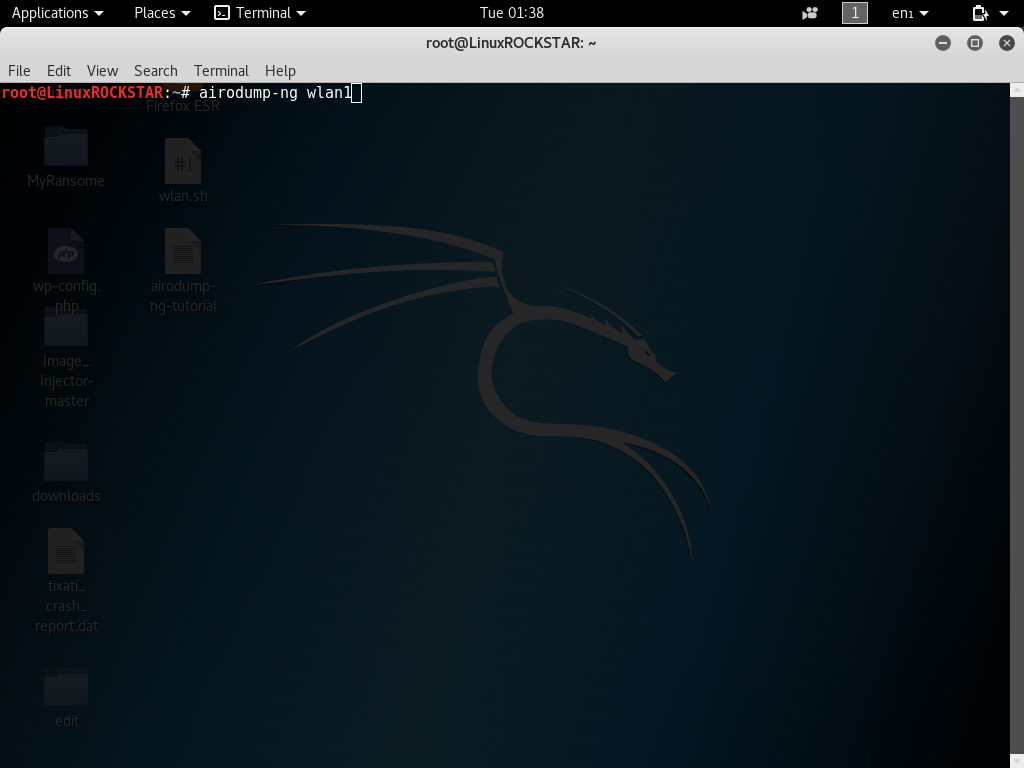 Beacons = Beacon frame is one of the management frames in IEEE 802.11 based WLANs. It contains all the information about the network. Beacon frames are transmitted periodically to announce the presence of a wireless LAN. Beacon frames are transmitted by the access point (AP) in an infrastructure basic service set (BSS).
#Data = IV/S =  Number of generated IV’s (Initialization Vector) per second. this is a arbitrary number that can be used along side a secret key for data encryption. This number is also know as a nonce, is it only ever employed only once in any session.
#/s = Number of data packets per second.
PWR = Signal level reported by the card. Its signification depends on the driver, but as the signal gets higher you get closer to the AP or the station.
CH = Wi-Fi Channel of Wireless Device (Router).
MB = Maximum speed supported by the AP. If MB = 11, it’s 802.11b, if MB = 22 it’s 802.11b+ and higher rates are 802.11g.
ENC = Tells encryption algorithm in use of the wireless devices in range.
CIPHER = The cipher detected. For example TKIP is typically used with WPA and CCMP is typically used with WPA2.
AUTH = Tells what authentication methods the wireless device uses.
ESSID = Tells the name, label of the wireless network.
STATION = Workstation, Device or Wireless Device that is connected to BSSID or looking for an access point.
Rate = Rate of data packet capture.
Lost = The number of data packets lost over the last 10 seconds.
Frames = Around of frames received
RXQ = Receive Quality as measured by the percentage of packets.
Probe = Tells what a Wireless device is probing in short this means what is the wireless device looking for. Example I own a mobile phone I have connected to a hotspot in the past but forgoten to forget that network the mobile phone would probe put to connect to that network everytime the wireless was enabled on the device.

Of course it can get quite repetitive after a while keep putting your interface down and then back up again every time you want to use airodump-ng. If you prefer to automate the process I have put a bash script together to help you along the way.