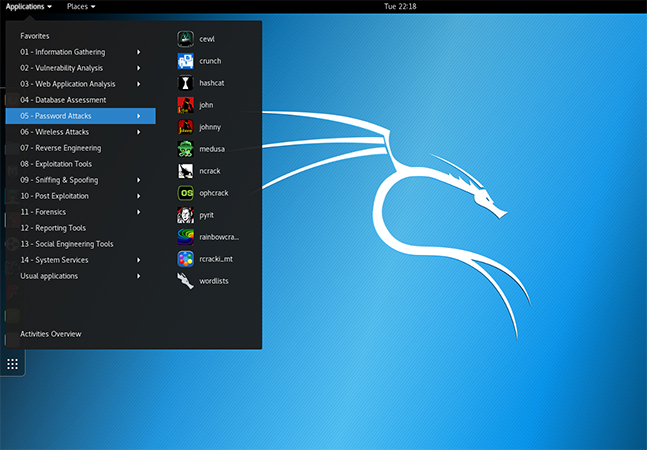 Kali Linux is the best operating system for beginner & professional pen-testers!  Kali Linux is an operating system based on Debian that is developed and maintained by Offensive Security and was designed for penetration testing and digital forensics. Kali Linux was first released on 13th March 2013. Whats makes Kali Linux stand out is that it is great for beginner and professional pen-testers alike as it comes with most the best and latest pentesting tools pre-installed.

The tools included in Kali Linux can be used for a number of different networking and security tasks. Most of the tools involve exploiting a victim network or application, performing reconnaissance on networks, network discovery, reverse engineering. scanning Web servers and applications for vulnerabilities IP address scanning. Kali Linux was born from its predecessor BackTrack. Many tools included in BackTrack were removed from Kali Linux to focus on the most popular penetration testing applications.

Kali Linux can be booted from CD-DVD or USB drive booting Kali Linux Live has many advantages. It’s non-destructive no changes to the host operating system or hard drive. It’s portable you can carry Kali Linux around in your pocket and boot it on any available system in minutes. with a bit of extra effort, you can configure your Kali Linux “live” USB drive to have persistent storage, so the data you collect is saved across reboots. Kali Linux can be installed a bunch of ways you can install Kali Linux to your hard drive as a single or dual boot. Another good way of using Kali Linux using your host operating system  is with VirtualBox a powerful x86 and AMD64/Intel64 virtualization software or you could use an alterntive virtualization software such as VMware Workstation. If you ask me the best way you can set Kali Linux up I recommend using from Live DVD/USB or virtualization software. Kali Linux always runs as a root user Kali Linux it was designed to be ran from a USB Pendrive and was never intended to be ran as a full OS install. If you want to use Kali Linux as a full time OS install on your hard drive create a secure user account by adding a new non-root user. Download Kali Linux: https://kali.org/downloads

Kali Linux requires a minimum of 3.8GB hard disk space for installation.
A minimum of 512MB RAM for i386 and AMD64 architectures.
A bootable CD-DVD drive or a USB stick.

Kali Linux comes with most of the best and latest pen-testing tools pre-installed and includes many of the best Social engineering tools and forensics tools such as.

Ettercap (Suite for man in the middle attacks)

Foremost (Foremost is a forensic program to recover lost files based on their headers, footers, and internal data structures.)

Volatility (Collection of tools, implemented in Python for the extraction of digital artifacts from volatile memory (RAM) samples)

Beef framework (BeEF is short for The Browser Exploitation Framework. It is a penetration testing tool that focuses on the web browser)