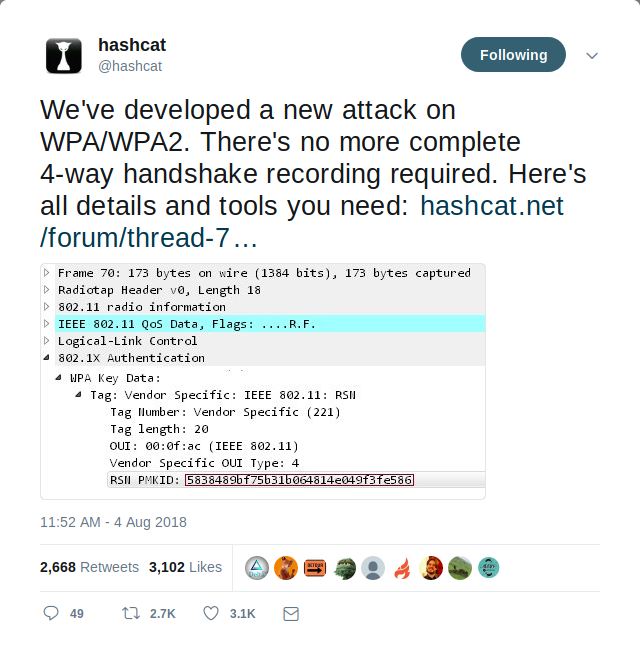 Crack WPA The goal of this project is to automate the process of capturing packets on a WPA2 protected wireless network, and crack their PSK (pre-shared keys). We know that WPA3 is coming, but most didn’t know that WPA2 was as susceptible to being broken as it is with this recently released Hashcat method.

TODO: include package list for other Linux distros. LMK if you figure any out!

For development and testing, I used the Ralink RT5370 USB wireless plugged into my Mac Book Air (6,1) laptop. The output from lusb is:

TODO: give examples of how this works, with specfic drivers

After resolving the requirements and understanding the gotchas:

NOTICE (8/14/2018) currently, once the scan is complete, your output file is saved in the out/ dir, ready to run against hashcat on a system with GPU processors. I’m working to get this bit automated so it will scp the file to a GPU enabled rig, run it there and give you the results. This is a WIP, working to have complete by next week!

This software is for educational purposes, in order to learn about vulnurable systems to better be able to protect yourself. I’m a big believer in ethical hacking, so do not use this software to break any laws. Don’t misuse this script, or information gathered from it to gain unauthorised access to any networks or hardware. Also, be aware, performing hack attempts without permission on computers that you do not own is illegal.