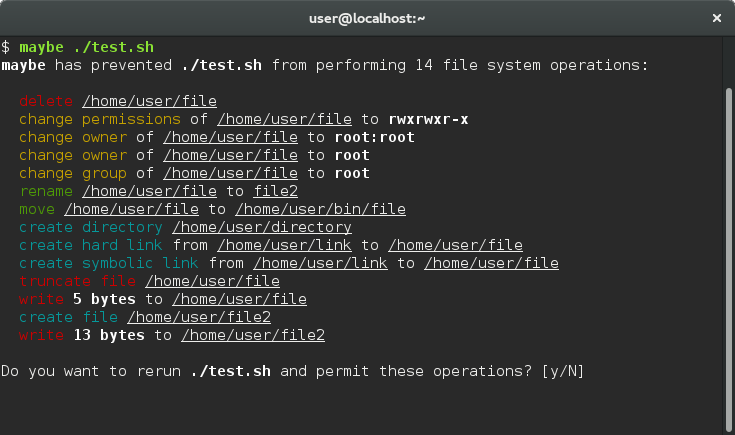 See what a program does before deciding whether you really want it to happen.

Are you sure? Are you one hundred percent sure?

… allows you to run a command and see what it does to your files without actually doing it! After reviewing the operations listed, you can then decide whether you really want these things to happen or not. What is this sorcery?!?

maybe runs processes under the control of ptrace (with the help of the excellent python-ptrace library). When it intercepts a system call that is about to make changes to the file system, it logs that call, and then modifies CPU registers to both redirect the call to an invalid syscall ID (effectively turning it into a no-op) and set the return value of that no-op call to one indicating success of the original call.

As a result, the process believes that everything it is trying to do is actually happening, when in reality nothing is.

That being said, maybe should  NEVER  be used to run untrusted code on a system you care about! A process running under maybe can still do serious damage to your system because only a handful of syscalls are blocked. It can also check whether an operation such as deleting a file succeeded using read-only syscalls, and alter its behavior accordingly. Therefore, a rerun without restrictions is not guaranteed to always produce the displayed operations.

Currently, maybe is best thought of as an (alpha-quality) “what exactly will this command I typed myself do?” tool.

maybe runs on Linux  and requires Python 2.7+/3.3+. If you have the pip package manager, all you need to do is run

either as a superuser or from a virtualenv environment. To develop maybe, clone the repository and run

in its main directory to install the package in editable mode.

By default, maybe intercepts and blocks all syscalls that can make permanent modifications to the system. For more specialized syscall filtering needs, maybe provides a simple yet powerful plugin API. Filter plugins are written in pure Python and use the same interfaces as maybe‘s built-in filters.

The public API is composed of the following two members:

A Blessings Terminal object that can be used to format console output (such as operation as documented below). Output formatted with this object automatically complies with the --style-output command line argument.

Add the filter filter_function to the filter registry. If the filter is enabled (which is the default, but can be altered with the --allow and --deny command line arguments), it intercepts all calls to syscall made by the controlled process. filter_scope determines the key to be used in conjunction with --allow and --deny to enable/disable the filter (multiple filters can share the same key). If filter_scope is omitted or None, the last part of the plugin’s module name is used.

filter_function itself must conform to the signature filter_function(process, args). process is a Process control object that can be used to inspect and manipulate the process, while args is the list of arguments passed to the syscall in the order in which they appear in the syscall’s signature. If an argument represents a (pointer to a) filename, the argument will be of type str and contain the filename, otherwise it will be of type int and contain the numerical value of the argument.

When called, filter_function must return a tuple (operation, return_value). operation can either be a string description of the operation that was prevented by the filter, to be printed after the process terminates, or None, in which case nothing will be printed. return_value can either be a numerical value, in which case the syscall invocation will be prevented and the return value received by the caller will be set to that value, or None, in which case the invocation will be allowed to proceed as normal.

Here, maybe‘s plugin API is used to implement an exotic type of access control: Restricting read access based on the content of the file in question. If a file being opened for reading contains the word SECRET, the plugin blocks the open/openat syscall and returns an error.

Indeed, the plugin works as expected:

Released under the terms of the GNU General Public License, version 3